What’s yours can be mine too

Are you as attached to the object you rent as to the one you own? Probably not! A recent study by researchers Fleura Bardhi and Giana Eckhardt (2012) shows that car sharing users value above all the functionality of the service. Studying Zipcar in the USA, the authors find that consumers do not become attached to the cars or to the brand. Emotional or aesthetic considerations are not part the picture. Generally, consumers don’t wish to engage further with the brand nor do they care about the physical damage done to the cars. This has dramatic consequences for the service provider.

So what’s missing? Zipcar has a fleet of various models. There is no consideration for design. Yet, the literature shows that designers can create a chain of meaning: new products force the development of new consumption practices, which in turn create new meanings and representations for consumers (Du Gay et al., 2013). Could this chain of meaning happen in car sharing? That is, could the cars’ design create meaning for the consumers?

Autolib’ is a Parisian car sharing system which has a design project at its core: all cars are the same model, the Bluecar. This uniformity gives users a repeatable experience. They develop an attachment to the object. This appropriation gives them a meaningful, harmonious relationship with the cars. 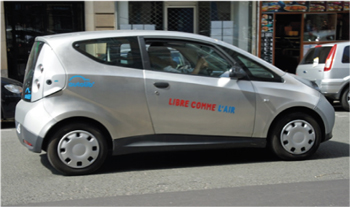 The findings of the present study show that the cars’ design, as well as the design of the service, foster three practices of appropriation:

Controlling, knowing and creating are practices of appropriation which, when enacted, render the use of the car sharing system meaningful for consumers. They make the service theirs. Meaning develops and the Bluecar becomes ‘the car of the future’, or ‘the true Parisian car’.

The contributions of this paper are twofold: