How working mothers interpret and include sustainability in their everyday lives

The notion of sustainability is used more and more in society and we, as consumers, are encouraged to contribute to the sustainable agenda. As fears for climate change escalate, governments attempt to work internationally to combat the irreversible damage to the environment and businesses often take a sustainable stance in an effort to be more appealing to consumers.

But little is known about how consumers understand sustainability, particularly in relation to fashion consumption. 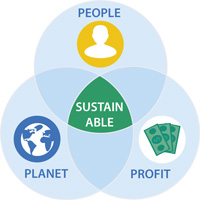 The fashion industry has been alleged of exploiting garment workers for over a decade, the Rana Plaza factory collapse in 2013 is one example of this. Yet, sustainability takes a broader approach to include people, profit as well as the well-being of the planet. This was defined by the World Commission on Environment and Development (WCED, 1987) in the report ‘Our Common Future’, who proposed international cooperation to prioritise sustainable development to ensure ‘development that meets the needs of the present without compromising the ability of future generations to meet their own needs’, as outlined in the figure.

Our research takes the view that sustainability includes the concepts depicted above and explores how working mothers interpret and include sustainability in their everyday lives with a particular focus on fashion consumption, use and disposability. Mothers were selected because it has been identified that ‘green’ behaviours are important to this cohort; this can be seen in the marketplace, where the rise in the number of baby products that are organic and eco-friendly has grown. Green attributes are not only considered as being best for babies, transferring notions of purity through being additive and chemical free, but also as constructing mothering identities where caring and nurturing extends from the family to the wider context of the environment. However, good intentions are often disrupted by the demands of others and practical restraints such as finances, convenience and options in the marketplace.

Twenty-eight mothers from Edinburgh and the surrounding area with children who were either pre or primary school aged were interviewed. To support the discussion, labels from high street fashion retailers that described a form of sustainable production were introduced. These included: M&S organic cotton, made in an eco-factory and fleece fabric made from recycled plastic bottles. These concepts were considered as part of the decision making process for fashion consumption (for both the mothers and their children) as well as how this informed other behaviours in the home.

The research examines the competing demands of contemporary mothering that we describe as threefold: 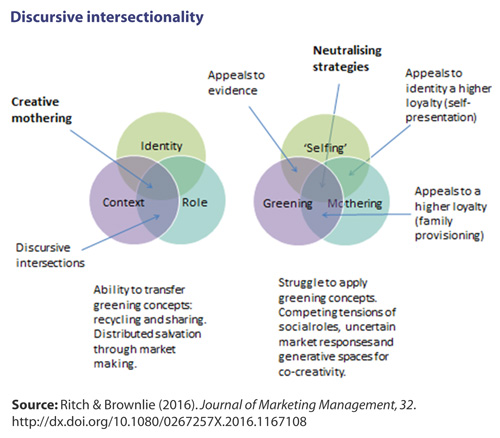 It was found that mothers adopt creative juggling practices to manage their everyday lifeworlds. This has been presented in the figure, where the left hand side illustrates that bursts of creativity occur to manage the interplay between the desire, moral ideology and responsibility. The research takes a closer look at this space and identified that when these three competing ideals cannot be met, appeals were used as a defence; we refer to these appeals as neutralisation strategies.

The paper explores the neutralisation strategies offered as a defence when behaviours were out of sync with moral ideals. For example, as an appeal to a higher loyalty – in this instance self-presentation refers to the style of the fashion garment, something that was more important than provenance or sustainability. This was a reflection that the eco-fashion available on the high street was considered as hippyish and did not follow fashion trends.

Similarly, an appeal to a higher loyalty of prioritising family provisioning was about maximising the family budget; this was especially important for the mothers who had reduced their working hours and had more than one child. As children need clothing more frequently than adults, due to their continued growth, this put an additional strain on the family budget resulting in a preference for inexpensive solutions. Additionally, children’s play activities sometimes resulted in damage to clothing and as they became socialised, children requested clothing that was popular with their peers. These demands for clothing were facilitated through inexpensive fashion retailers and supermarket fashion, despite allegations that the workers who made the clothing may have been exploited. It was hoped this was a temporary behaviour to cope with the practicalities of clothing their children and as their growth stabilised, fashion with better provenance could be purchased.

Finally, there was an appeal to evidence: although there was a high awareness of the allegations made against UK fashion retailers exploiting workers who made the clothing, this was set against a cultural context. This included that western ideals and ways of life should not be forced on other cultures and that expectations of salaries were not the same in developing countries. It was also contested how accurate the allegations were, especially when disputed or purportedly rectified by the fashion retailer. Although there was much ambiguity surrounding claims of exploitation, the garment labels that acknowledged the environment and garment workers were positively received, supporting the idea of brands promoting social surrogacy and locating a ‘salve’ within sustainable positioning.

It is here that brands can position themselves as expert systems for delivering the socially valorising credentials of the green mother and there is the potential for the fashion industry to engage with sustainable concerns. Until such a time, to cope with the imperfect options that are available on the high street, consumers will fill this space with creative suppositions.