Can marketers create brand value by fanning the flames of a social media firestorm?

Three words, when assembled, that strike fear in the hearts of those who manage brands. And rightfully so. With all the negative attention, what marketer would actively choose to embrace that type of heat? No thanks! Conventional wisdom on how to deal with a social media firestorm suggests that managers should react fast, reply respectfully, and try to resolve the underlying issues in an attempt to extinguish the flames as fast as possible.

Appeasing brand critics looks like a safe thing to do. However, how many great brands have been built by always playing it safe?

We believe that appeasing brand critics as a one-size-fits-all firestorms solution is short-sighted. Our research shows that in today’s polarized and hyper-connected society, some social media firestorms actually provide opportunities to create brand value! To leverage these opportunities, marketers need to embrace the firestorm, fan its flames, and fight back.

The Foundations of a More Assertive Response to Social Media Firestorms

Further fanning the flames certainly sounds counter-intuitive to many marketers. After all, social media firestorms can tear down carefully built brand value within days.  How can feeding the firestorm and antagonizing critics actually build brand value?

Our more assertive approach is rooted in three ideas:

1) There are different types of social media firestorms

In some instances, the company is singled out because it is objectively at fault (e.g. responsible for product failures, or unseemly poor service). In these cases, marketers should typically follow conventional wisdom as they plan their response strategy.

However, in other instances, the company is not objectively at fault and has been called out by consumers or activists for being associated with particular social issues or agendas (e.g. Nike with Colin Kaepernick).

These morally-focused situations, which are increasingly common and often sparked by a loud minority of critics, provide marketers with an opportunity to stand their ground in the midst of a firestorm.

If marketers sense that their customers, or at least many of them, are aligned with the company’s espoused position on the focal social issue, they can continue to advocate for that position, even if it means facing further criticism from opposing parties in a firestorm, or even losing a few unaligned followers.

Recently, fashion brand Diesel celebrated losing over 14,000 Instagram followers in response to its public support of Pride Week in Europe. In doing so, it was able to visibly assert the brand’s values for current and future customers.

We’ve taken pride in our beliefs for 40+ years & we believe in #pride. For those who don’t, including the 14.000 followers who’ve left us in the last week…. bye bye! To those who share our beliefs and values, let’s celebrate the fact that #loveislove. Always.

3) Marketers can co-create brand stories with digitally-engaged consumers, including during social media firestorms

However, co-creation also occurs during times of turmoil. Harnessing this potential in the context of social media firestorms means that marketers can marshal together the storytelling efforts of many supportive stakeholders, rather than simply depending on its own singular voice as it navigates a firestorm.

Collectively, these ideas support the use of a new type of strategy in response to some social media firestorms. We see evidence of this escalation strategy being successfully applied in our netnographic study of a firestorm targeting Protein World, a UK-based nutrition and supplement company, and its ‘Are You Beach Body Ready’ advertising campaign.

This advert pretty much sums up everything that I despise about how we treat and value women's bodies. pic.twitter.com/PBZNyn8qop

In our study, we find that Protein World unsuccessfully experimented with more conventional response strategies on Twitter before finally pursuing a more assertive, escalation strategy that involved embracing and even fueling the controversy through purposively antagonizing brand critics.

As the firestorm wound down, the brand claimed thousands of new social media followers, engaged brand supporters, increased media attention, and yielded – according to the company – over a million dollars in new revenue.

How did the brand orchestrate its unconventional response to the social media firestorm?

First, Protein World engaged in dual framing to accentuate the moral tensions between camps in the firestorm. It retweeted hostile and vulgar tweets from brand antagonists to alert brand supporters of the on-going attack and cast its opponents in a negative light. 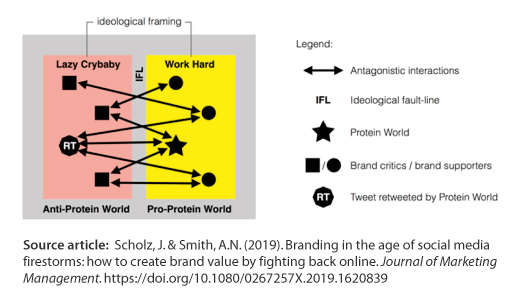 Moreover, it infused ideological frames into its messaging. Through its replies on Twitter, Protein World presented itself as a defender of the brand’s (and their customers) ‘work hard’ values. Its critics, on the other hand, were framed as promulgators of an opposing ‘lazy crybaby’ ideology.

These tactics, which served to establish the brand as a moral protagonist, also had the effect of widening the ideological fault line between brand supporters and critics.

Second, Protein World engaged in and structured supporters’ counter attacks. The brand adopted incendiary and moralistic tones in messages that targeted brand critics. These messages both infuriated critics and rallied supporters who congratulated the brand on not caving in to criticism.

The brand also engaged in cultural jujitsu – the act of using critic’s attacks against them – by reworking critical hashtags to ones more supportive of its ideology. For example, charges that Protein World was #bodyshaming with its ads and tweets were countered with charges that brand critics were #fitshaming the model who was shown in the ads.

These messaging frames, tones, and hashtags provided rhetorical resources for brand supporters to use in distributed counter-attacks against brand critics engaged in the social media firestorm.

Interestingly, our analysis only showed widespread brand support emerging after Protein World adopted the escalation strategy. At the beginning of the social media controversy, during which the brand adopted more conventional approaches to mitigating the firestorm, the brand stood alone against its critics. But once Protein World started to fight back, support poured in.

Our study offers some novel insights for researchers interested in (1) online firestorms and (2) branding in social media environments.

Our research offers practitioners an alternative to appeasing brand critics during a social media firestorm. Granted, the escalation strategy we describe here might not be the best choice in all situations or for all companies. It does, however, invite marketers to rethink their branding frameworks for the social media age and how they can build authentic and resonant brands through dialogical interactions with stakeholders in real-time.