So many companies are caught up in the news cycle for all the wrong reasons. Recent examples of corporate scandals include those relating to Nissan Motors for the arrest and removal from the board of its chief for alleged financial misconduct, the Volkswagen emissions scandal and accusations of sexism within Uber. On the flip side, companies continue to work hard to communicate that they are a good companies to work for, that they support good causes, are environmentally responsible, and have excellent leadership and financial performance. In acting and promoting their corporate brand along such lines has put companies like Campbell’s at the top of lists that measure and celebrate companies for building their corporate reputation in positive ways.

But does corporate reputation really affect consumers when they are evaluating products? Or do consumers care more about the features of the product?

In recent research published in the Journal of Marketing Management, researchers Paul Burke, Grahame Dowling & Edward Wei at the University of Technology Sydney decided to just see how much consumers were willing to pay for a good reputation relative to features that might be just as valuable. They then posed a number of variations around this central question of whether reputation matters.

The challenge for marketers is that corporate reputation emerges from all activities taking place across the entire company – it stretches beyond one product category, beyond consumers to consider a range of stakeholders, such as investors, and beyond the responsibility of brand managers to be the responsibility of executives, its employees and, quite literally, the entire corporation.

Corporate reputation is not just about brand equity. Nor is it simply all about corporate social responsibility (CSR).

In terms of measurement, corporate reputation often encompasses a range of dimensions including how people feel about the company, the quality and innovativeness of its products, its workplace environment and workforce, its vision and leadership, financial performance and social and environmental responsibility.

The research by Burke and colleagues focused on consumers who were in the market for televisions. They were asked to choose between televisions based on a range of features that were fairly standard (like warranty, price, size), but also things that were quite novel to most consumers however sound important (like having backlight control or dynamic range control). Each product was also described by the company who manufactured the televisions: Sony, Panasonic or Toshiba. As well as completing this choice experiment, consumers provided individual evaluations of each of the three companies on their corporate reputation based on work by Charles Fombrun and developed with colleagues at the Stern School of Business, New York.

A choice model then incorporated the individual consumers judgements of reputation to evaluate how much each feature influenced choice and how much individual corporate reputation did too. Using this model, it was determined that consumers were willing to pay (WTP) a premium for products manufactured by reputable companies: that is to be expected.

A company evaluated by consumers to be one standard deviation better in its corporate reputation that its competitors, allows it to command a premium of 8.7% for its products.

But things get more interesting in that consumers are willing to do so more if it is an important feature, but less so for something that might be deemed a meaningless feature. 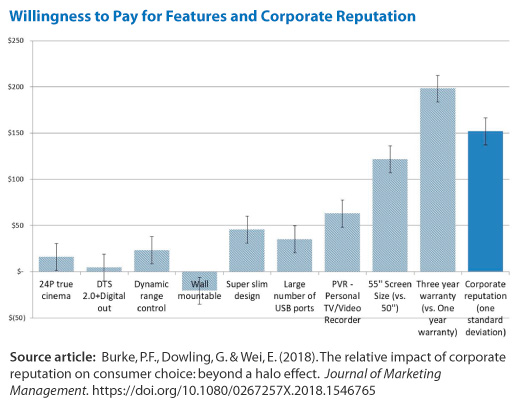 For example, in the case of screen size, consumers are willing to pay $121 more for a television that is 55” over one that is 50”; this WTP amount increases by a further 22% to $147 if the same offer is made by a company that is one standard deviation higher on the corporate reputation measure. Similarly, a consumer is willing to pay $198 more for a television which comes with a 3-year warranty against an identical television offered with a one year warranty; this difference increases to $221 when the same television is offered by a company one standard deviation higher with respect to its reputation. In other words:

An extra two years on a warranty was worth 11% more when being offered by a more reputable company.

But this increase in the valuation of product features does not hold for those features that consumers are less clear in terms of their value to consumers. For example, consumers will pay $63 more for a television promoted as having Personal Video Recorder regardless of the corporate reputation of the company offering the product with this feature.

The takeaway is that corporate reputation may not be something that can be readily controlled by marketing managers, but definitely something that should be commanding their attention. A better corporate reputation allows the marketer to offer a product by which its features appear to be more valuable, results in consumers being less sensitive to any price increases as well as be more likely to be chosen.